Listen live on line as well at http://www.swindon1055.com

Link to the Podcast: http://www.swindon1055.com/ondemand/

Back from the Alps – French can’t make tea can they!

Yay!!! At last the day of departure arrived. Up early to a bright sunny morning and we all arrived at Membury service station ready for an “official” start for our Run to the Alps adventure!  Errrrrr……then the Harley arrived waking up everything within a mile radius!

We were eight bikes. Leaving in groups of four we headed to Maidstone services via Bracknell, M3 and the M25, to meet up with the four ladies travelling in the car.  Mike, Mary, Barbara, Mark, Peter, Marilyn, Bob, Sian, Winston, Sue, Peter, Stephen and Julian.  The Run to the Alps team!

Then onto the Chunnel for our 12:20 crossing. We made it with plenty of time to spare to find a delay of approx. 30 minutes or so, but never mind.

The plan was to ride to Reims for our first night stop not using the autoroutes where possible. This worked well for most of the way, but after three hours or so in France we decided that the last hour should be on a fast road. It was hot; it was thirsty work; it was a long way; approx. 370 miles in one day in France only! Total of around 580 miles!

Dinner in Reims was wonderful! Stopping at the first restaurant we came to, we sat outside enjoying the delights of a warm spring evening.  We were stopped on the way back to the hotel by as a local chap asking what does “whatever” mean. After explaining to him, we went on our merry way, literally, as were rather high on his “tobacco”!

Up and out by 10am ish the sun beat down on us again as we headed for our second night’s stop in Lons Le Saunier.

Eight bikes riding along some fantastic roads with fields filled with rapeseed and masses of yellow flowers. Brilliant! Unless you suffer with hayfever in which case your eyes would be closed so this profusion of colour was sorely missed.

Riding in chevron style, we quickly made progress – after all, we are supposed to be advanced riders aren’t we.

Going “wrong” a couple of times en route we saw some very pretty villages, one notably with a 50 arch viaduct.

Arriving in Lons Le Saunier after another hard slog, we had a couple of beers followed by a cuppa tea!

This is the day we plan to arrive in Chatel for our three night stay. We decided on two routes so promptly split into two groups. One group went through some twisty, bendy, windy roads via Geneva where I am reliably told they enjoyed lunch overlooking the lake. Whilst the rest of us went for a simpler approach eventhough we also found some great twisting and bendy roads to get our knees down on!

Today, the weather had changed a little. It was cooler and overcast slightly. This made for better riding weather.

Whizzing along following the car, the team I was in ended up in Nantua where we stopped for a coffee. On the way though we sped through forests of pine; not only did we also have windy and bendy roads we had to avoid an aggressive truck too!

We took the main fast road, and autoroute around Geneva which was spectacular in itself. Set high up on a modern day viaduct we made really good progress and made best use of the 130kmh speed limit all the way to Thonon.

The road from Thonon followed the mountain roads to Chatel via Adondance. Unfortunately, the direct road was blocked by a landslide which meant we had to turn back and take a smaller mountain pass – oh well, never mind as this turned out to be a beautiful ride through some small villages, bringing us out into the middle of Abondance, only a few miles from Chatel.

Through Chappelle’d’Abondance (where I stayed back in 1992) we pootled along to Chatel. Filling up at the Intermarche we took the lower road into town, and up a very zig-zaggy road – this was our first real encounter of mountain roads and a small taster of what was to come later in the week!

Heading through Chatel on the route de Vonnes, towards the Swiss town of Morgins, our home for the next three days could be seen on the left hand side overlooking a lake and fountain! 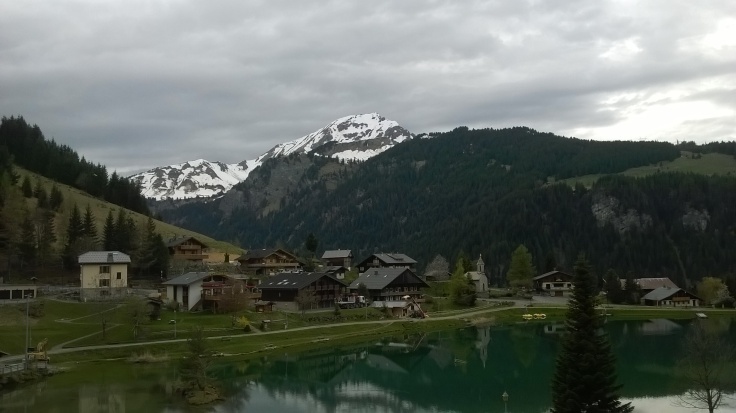 The chalet is owned by a couple, Sue and AT Stevenson and their two sons; plus Sidney the dog. Turns out Sue is a wonderful cook and our first night we had duck.

Decided to head out to Gstaad for a long circular ride. Trouble was, the road was blocked still by snow! So, headed to Chamonix instead.

Lunch in Switzerland is eye wateringly expensive as we found out!

The next day, we went to Avoriaz I stayed at Christmas with Sally and our two boys, Richard and Jonathan. The photograph below made them a little jealous.

Leaving Chatel after three great nights, we followed the route back the way we came to Geneva on the Autoroute. And this is where things got very interesting in terms of weather! It rained! It poured! It chucked it down. And it was rather windy too. 5 hours of that was enough. We couldn’t wait to get to Troyes for our penultimate evening stop.

Not quite the ride we were planning, but we had to change plans as the Harley was playing up a little in terms of tyre wear – probably due to being a soft compound meant the tyre started to rip itself to pieces which is a little worrying – more so for the rider than anyone else!

Very pretty main square in Arras filled with 500 classic cars which were just leaving when we arrived. Shame as I would like to have spent time admiring them so I had to console myself with a couple of large beers instead!

Saturday – left Arrass in plenty of time for the hour or so run back to the Chunnel.

The roads in the UK are rather miserable aren’t they? Awful in places.

What a great trip this turned out to be. Full of wonderful scenery, roads, towns and villages on the way.  Good company too as well as good food, wine and beer.

Shame about the bloody tea though!